This guide is to assist you in locating resources about MMIWG in Canada. Here you will find links to books, ebooks, journals, databases, videos, websites and more about the women.

How to search for DVDs

OneSearch enables you to search for multiple types of library resources simultaneously. Unfortunately, DVDs titles can get lost among thousands of search results.

To find just the DVDs, apply these filters: 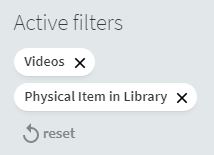