This guide is to assist you in researching topics related to Indigenous health. Here you will find links to books, ebooks, journals, databases, websites, and more. 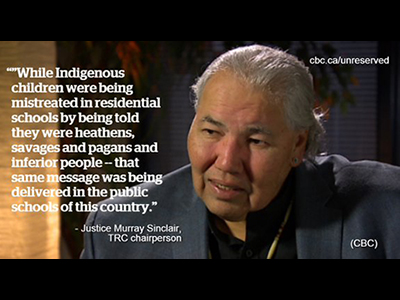 The Truth and Reconciliation Commission of Canada (TRC) revealed that throughout the 130-year residential school period, which ended in the 1990s, Indigenous children learned that Aboriginal cultures were inferior to those of Europeans and Christians. And at the same time, other Canadians learned the same thing. Racism against Indigenous peoples has been taught and learned.  We can end the ignorance and falsehoods about our history in one generation if provincial governments ensure that all Canadian students learn about the experiences of Indigenous peoples in Canada. If we teach our children the truth, they can be leaders in the critically important work of ending racism and bringing about reconciliation in our country.