This guide will direct you to some great resources located in the Library in the Indigenous culinary arts field. 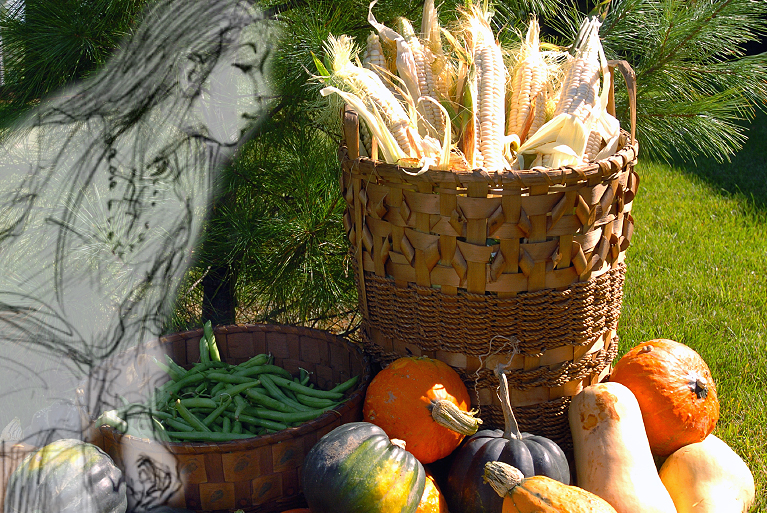 The following story, entitled “The Three Sisters,” was recorded by Lois Thomas of Cornwall Island, Canada. It is one of a collection of legends compiled by students at Centennial College, Toronto, Canada. Out of respect to native culture, we ask that you share the legend in a spirit of respect.

Once upon a time very long ago, there were three sisters who lived together in a field. These sisters were quite different from one another in their size and also in their way of dressing. One of the three was a little sister, so young that she could only crawl at first, and she was dressed in green. The second of the three wore a frock of bright yellow, and she had a way of running off by herself when the sun shone and the soft wind blew in her face. The third was the eldest sister, standing always very straight and tall above the other sisters and trying to guard them. She wore a pale green shawl, and she had long, yellow hair that tossed about her head in the breezes.

There was only one way in which the three sisters were alike. They loved one another very dearly, and they were never separated. They were sure that they would not be able to live apart.

After awhile a stranger came to the field of the three sisters, a little Indian boy. He was as straight as an arrow and as fearless as the eagle that circled the sky above his head. He knew the way of talking to the birds and the small brothers of the earth, the shrew, the chipmunk, and the young foxes. And the three sisters, the one who was just able to crawl, the one in the yellow frock, and the one with the flowing hair, were very much interested in the little Indian boy. They watched him fit his arrow in his bow, saw him carve a bowl with his stone knife, and wondered where he went at night.

Late in the summer of the first coming of the Indian boy to their field, one of the three sisters disappeared. This was the youngest sister in green, the sister who could only creep. She was scarcely able to stand alone in the field unless she had a stick to which she clung. Her sisters mourned for her until the fall, but she did not return.

Once more the Indian boy came to the field of the three sisters. He came to gather reeds at the edge of a stream nearby to make arrow shafts. The two sisters who were left watched him and gazed with wonder at the prints of his moccasins in the earth that marked his trail.

That night the second of the sisters left, the one who was dressed in yellow and who always wanted to run away. She left no mark of her going, but it may have been that she set her feet in the moccasin tracks of the little Indian boy.

Now there was but one of the sisters left. Tall and straight she stood in the field not once bowing her head with sorrow, but it seemed to her that she could not live there alone. The days grew shorter and the nights were colder. Her green shawl faded and grew thin and old. Her hair, once long and golden, was tangled by the wind. Day and night she sighed for her sisters to return to her, but they did not hear her. Her voice when she tried to call to them was low and plaintive like the wind. But one day when it was the season of the harvest, the little Indian boy heard the crying of the third sister who had been left to mourn there in the field. He felt sorry for her, and he took her in his arms and carried her to the lodge of his father and mother. Oh what a surprise awaited here there! Her two lost sisters were there in the lodge of the little Indian boy, safe and very glad to see her. They had been curious about the Indian boy, and they had gone home with him to see how and where he lived. They had liked his warm cave so well that they had decided now that winter was coming on to stay with him. And they were doing all they could to be useful.

The little sister in green, now quite grown up, was helping to keep the dinner pot full. The sister in yellow sat on the shelf drying herself, for she planned to fill the dinner pot later. The third sister joined them, ready to grind meal for the Indian boy. And the three were never separated again.

Every child of today knows these sisters and needs them just as much as the little Indian boy did. For the little sister in green is the bean. Her sister in yellow is the squash, and the elder sister with long flowing hair of yellow and the green shawl is the corn.
–A Mohawk legend

By the time European settlers arrived in America in the early 1600s, the Iroquois had been growing the “three sisters” for over three centuries. The vegetable trio sustained the Native Americans both physically and spiritually. In legend, the plants were a gift from the gods, always to be grown together, eaten together, and celebrated together.

Together, the three sisters provide both sustainable soil fertility as well as a healthy diet. Perfection! TIPS FOR GROWING THE THREE SISTERS 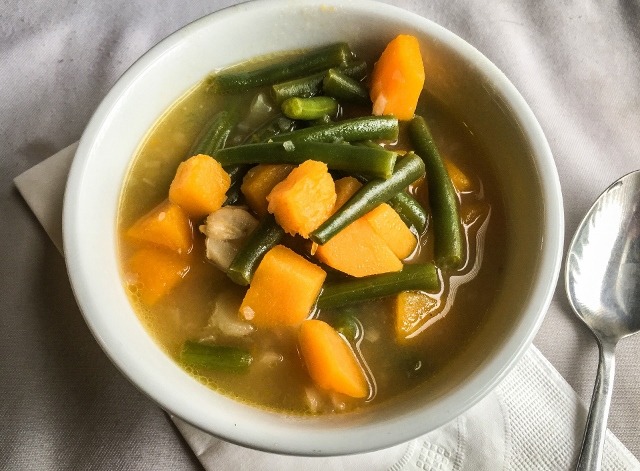 The Three Sisters Soup recipe is a traditional Native American recipe from the Haudenosaunee (Iroquois) nation. The term “Three Sisters” refers to the three main crops of some North American tribes: maize (corn), squash, and beans. The three plants were planted close together and like close sisters, aided one another in their respective growing processes. This type of ecological cooperation is one that many tribes believe humans should replicate.

Place the hominy, green beans, squash, and potatoes into a pot, and pour in water and chicken bouillon. Bring to a boil

Then reduce heat to low, and simmer until vegetables are soft, about 10 minutes.

Blend flour into the butter, and then stir into the soup. Increase heat to medium, and cook for 5 more minutes, or until soup thickens.

Season with pepper, and serve.