Empowering students and staff in the development of their intercultural competence and enhancing their understanding for gender and sexual diversity.

Disability is not uncommon. Four million adult Canadians and one billion people across the globe have a disability. When thinking about disability, sometimes we concentrate on those situations that can be somewhat visible, like individuals using a wheelchair, or individuals who are blind or deaf. But the spectrum of disability is broad and complex. And in most cases, it can be invisible unless a person chooses to disclose. This can be the case with learning disabilities or a diagnosed mental illness, for example.

It is the goal of this resource to contribute to our educational efforts in breaking down some of the attitudinal barriers that prevent people with disabilities from their full participation in society.

The National Film Board of Canada celebrates the United Nations International Day of Persons with Disabilities. In this curated playlist, we bring together films that promote an understanding of disability issues and mobilize support for the dignity, rights and well-being of persons with disabilities.
Compiled by: Albert Ohayon
Photo Credit: NFB

Shameless: The ART of Disability
Art and activism are the starting point for a funny and intimate portrait of five surprising individuals with diverse disabilities. Packed with humour and raw energy, this film follows the gang of five from B.C. to Nova Scotia as they create and present their own images of their disabilities.

John and Michael
This animated short pays tribute to two men with Down syndrome who shared an intimate and profoundly loving relationship that deeply affected the filmmaker. Narrator Brian Davis brings the characters to life with great sensitivity.

How Does it Feel
This short documentary is a meditation on performance, self-expression, (dis)ability, and the power of art. At age 58, Kazumi has decided to use his singing voice to channel his cerebral palsy (CP). As Kazumi draws from his exuberant, poignant and painful experiences, performer and teacher Fides Krucker guides him to embrace his inner artist. Kazumi's one-man show features songs like Smokey Robinson's "Tracks of my Tears" which take on new and unexpected meaning in this moving account of transformation through the power of song.

Bearing Witness: Luke Melchior
This feature documentary is a portrait of Luke Melchior who, at 26, has lived longer than most people with Duchenne Muscular Dystrophy, a progressive wasting of the muscles. Knowing his life will be relatively short has made Luke feel an urgency about making a lasting contribution. He lives independently, with the help of 3 homecare workers, runs a web-based business selling outdoor gear, and chairs the board of the Disability Resource Centre in Victoria, BC, where he is a passionate advocate for the rights of the disabled.

Citizen Sam
This feature documentary is a portrait of Sam Sullivan, a quadriplegic city councillor running for Vancouver mayor. Blending the rough and tumble of the campaign with intimate moments from Sullivan's daily life, the film is an unflinching portrait of the one-of-a-kind politician.

Petra's Poem
In this short film, Toronto artist Petra Tolley, who has Down syndrome, performs a soliloquy that encapsulates her distinctive take on the social self. Drawing from her emotional experiences, she illustrates what it feels like to be “in the middle.” Employing rotoscopy, hand-drawn animation techniques and subtle stereoscopic 3D, the film captures Petra as she engages the camera with unflinching directness and dignity.

Toward Intimacy
This feature documentary follows a number of women with disabilities as they affirm their right to seek, develop and sustain intimate relationships with the partners of their choice. In this moving one-hour film, four disabled women from across Canada share their personal experiences, with particular emphasis on sexuality, self-esteem, stereotyping, and parenting.

Between Laughter
This feature-length documentary looks at Stephen O'Keefe, a deaf, stand-up comedian. Faced with the usual challenges that life presents - marriage, children and career - Stephen works extra hard just to be able to hear (with the aid of a cochlear implant) and communicate with those around him. While many hearing-impaired people find life isolating, Stephen embraces the spotlight and chooses to step forward and entertain people.

My Friends Call Me Tony
Meet Tony Rossi, a 10-year-old boy who can only distinguish light from shadow. Despite this difficulty, he leads a very active life. The short documentary shows the ingenious ways in which Tony manages his life. This film is part of the Children of Canada series.

Two Sisters
This animated short, etched directly onto tinted 70 mm film, depicts the story of two sisters: Viola, who writes novels in a dark room, and Marie, her only companion. Disfigured, Viola counts on her sister to take care of her and shelter her from the outside world. But when an unexpected stranger turns up on their front door, the sisters' quiet lives are disrupted and their routine turns to chaos.

All About Kids
This vintage short doc from the sixties brings together three quaint vignettes about Canadian childhood. In Quebec Aquarium, school children see marine life at close range, while Children's Play Therapy focuses on the importance of games and handicrafts for young patients recovering at Winnipeg’s Children’s Hospital. Finally, Soccer School takes us to British Columbia, where British coach Trevor Churchill is helping to spark interest in the increasingly popular sport.

Acting Blind
This touching documentary follows a cast of blind and visually impaired actors as they prepare Dancing to Beethoven, a play about blindness. The film takes us deep into the lives of the actors. We hear stories of their shock and disbelief at first losing sight and of their struggles coping with a life without it. We hear them talk about grieving and pining for the visual world. They tell the moving story of how this play is itself a victory, a type of salvation, for each of them. By opening night, at the renowned Place des Arts in Montreal, they are a close-knit cast, well-honed and ready to step out of the wings and into the light.

I'll Find a Way
This Oscar®-winning documentary presents Nadia, a 9-year-old girl with spina bifida. Her dream is to attend a regular school, even though she knows other kids will tease her. Wise for her young age, Nadia simply decides that she'll "find a way to deal with it." Despite having to overcome many obstacles, Nadia's got spunk and makes it clear she's not looking for sympathy. This film is part of the Children of Canada series.

You Can't Ask That

You Can't Ask That is a documentary series that confronts prejudices and breaks down taboos in our society in an authentic and relatable way.

We meet Canadians from across the country who reveal what it’s like to be a wheelchair user. They candidly reveal the challenges, frustrations and some surprising benefits.

Often mocked and stigmatized for their disability, Canadians with Tourette syndrome candidly answer questions about what life is like living with what is mistakenly called “the swearing disease.”

This episode answers questions about what it is like to navigate the world without sight, and the answers are enlightening.

People on the autism spectrum face stigma and judgment, often because it shows no outward signs. Our panelists discuss what it feels like to be on the spectrum.

Through accident, illness or birth, people with limb differences receive a lot of attention. That can be annoying ... and offer an opportunity for raising awareness.

Little people face social stigma and curiosity. In this episode, we meet people from different backgrounds who explain what it is like to live in a world that sees them as disabled.

This episode give us a heartwarming and candid view into the lives of people with Down syndrome, from dating to work and the importance of hugs.

For many with facial difference, life can be difficult. We meet Canadians who open our heart and eyes to what it’s like to live with a face that looks different.

Amar: Deaf is an Identity

Communicating through American Sign Language, Amar Mangat shares his journey navigating the city as a deaf, queer South Asian youth living in Vancouver, BC Canada. Amar: Deaf is an Identity explores the intersection between the deaf, hearing, queer and People of Colour communities in a world that privileges hearing, heteronormativity and whiteness.

The Two Little Words That Can Change a Life

Pamela Schuller's case of Tourette's syndrome almost forced her out of the Jewish community completely. But a few lessons from Moses and improv comedy helped turn things around. In this personal, uproarious talk, Pamela shares her story and an important perspective on the role of difference.

Maysoon Zaid: I've Got 99 Problems and Palsy is Just One

"I have cerebral palsy. I shake all the time," Maysoon Zayid announces at the beginning of this exhilarating, hilarious talk. "I'm like Shakira meets Muhammad Ali." With grace and wit, the Arab-American comedian takes viewers on a whistle-stop tour of her adventures as an actress, stand-up comic, philanthropist and advocate for people with disabilities. 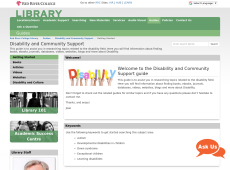 Check out the guide Disability and Community Support

This guide will assist you in researching topics related to the disability field. Here you will find information about finding books, ebooks, journals, databases, videos, websites, blogs and more about Disability.